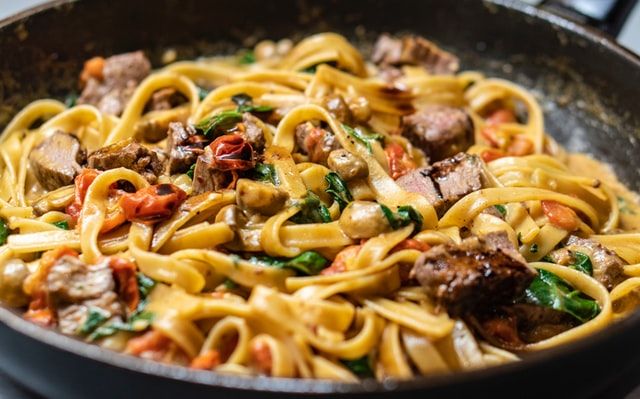 I’ve discovered something I never knew before: October 25th is World Pasta Day, a day to celebrate the versatile deliciousness of one of the most popular Italian dishes. It all began in 1995 when 40 pasta producers decided to form a World Pasta Congress. Today, the date is essentially about exploring the many different varieties of pasta and falling in love with it all over again.

Controversy remains about the true origin of pasta. Some say it was first made in China, others claim the early Romans created it using a flour and water dough recipe. There is another theory dating its origin as far back as the 4th century BC. Pictures on an Etruscan tomb depicted people making a dish that looked very like pasta.

Walk down the pasta aisle in any supermarket and you’ll likely come across spaghetti, penne and macaroni. Italians know there is a huge variety out there. From the stuffed ravioli of the north to intricate shapes of the south, each region of Italy offers its own unique pasta shape, indeed 400 forms with many different names Garganelli, Strangozzi, and Fileja to name just three.

Thus in Italy, people eat no less than 26 kg of pasta per head per year. In other countries where people have been drawn into the argument that low-carb or gluten-free diets are best, consumption has lately declined. But according to dietician Frankie Phillips: ‘Pasta can be a really good part of a diet. It has next to no fat, is a good source of energy and contains quite a lot of different B vitamins.'

Of course, it depends on how large your portion is. When I lived in Sicily I was often amazed by the great mounds of spaghetti some people managed to consume. It was also considered a ‘magic’ food for children and no bambino would grow up healthy without eating it daily. No wonder some of the little darlings were chubby.

Personally, I love pasta and cook it in various ways, one of my favourites being Pasta alla Norma, which involves tomato sauce and aubergine (eggplant) finished with a sprinkle of smoked ricotta. So I say, World Pasta Day and beyond, let’s commemorate this scrumptious gift from our ancestors and treat ourselves to some pasta love.

My latest book: If You Loved Me –a story of love, loss and a cat called Leonardo is set in Rome and my characters certainly enjoy their food. I also use meals as settings for important dialogue.